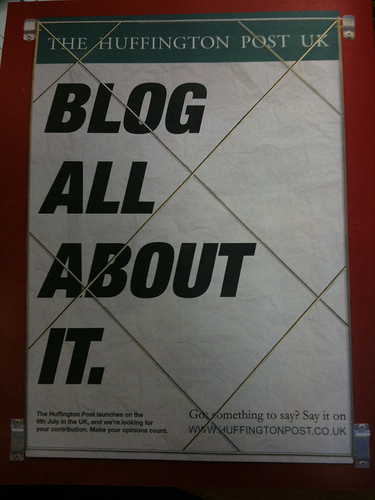 In July 2011, the Huffington Post debuted a U.K.-specific website filled with local, regional, and global news as well as content targeted to the U.K. audience. Now, it’s time for brands to get in on the action.

Branded blogs and brands as media are trends that will surely dominate 2012 marketing strategies as more and more companies realize the importance of social media and content marketing to connect with and engage with consumers. On the flip side, publishers need to find new ways to generate income. Traditional online display advertising isn’t enough anymore, and with brands actively looking for opportunities to connect with consumers on the Web, the trend could deliver big rewards for publishers, too.

As long as branded blogs aren’t overtly promotional, audiences are likely not to mind them. If brands publish useful and meaningful content targeted to the site’s existing audience, branded blogs won’t be intrusive. Whether or not branded blogs will succeed on Huffington Post U.K. and beyond depends on the ability of participating brands to avoid self-promotion. 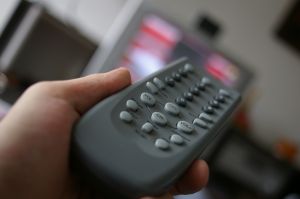 Bluefin Labs is a social TV analytics company that uses social data to analyze how audiences feel about brands and ads that they see on television. Recently, Bluefin Labs released data that shows some interesting relationships between brands and TV based on audience conversations, activities, and behaviors on the social web.

For example, Adweek reports that the study revealed people who talk about Walmart on the social web are likely to tweet and comment about very different television shows than people who talk about Target. There is similar disparity between Coke and Pepsi. Sports television is a top source for Coke social brand buzz, but that’s not the case for Pepsi. In fact, none of the top 10 television shows that correlate with Pepsi social conversations are sports programs. Analytics to determine brand “top 10” lists were gathered primarily from public Twitter and Facebook posts as well as from some blogs about television.

Bluefin Labs also dissects the data using consumer data. For example, the top television shows and networks that correlate with online social conversations for cat owners can be contrasted to a list for dog owners.

For brands, this data can be extremely useful in targeting television shows for ad buys that are likely to drive not only the highest return on investment in terms of sales but also in terms of social brand buzz. That brand buzz on the social web delivers two things to brands: increased brand awareness and recognition as well as a direct line to consumer thoughts, perceptions, and behaviors. It’s an amazing source for market research data. Brands that have social media and content marketing strategies in place can leverage the online conversation, join it, and reap even greater rewards.

This type of research data is expected to grow in terms of depth and availability in the near future. For example, Bluefin Labs plans to dive deeper into the content of social conversations in addition to the cause-effect relationship between television and social data.

There is no doubt that this kind of data is very valuable to brands. In a consumer environment that’s louder and more cluttered than ever, targeting ads and listening to consumer conversations is more important than ever.

What do you think of the Bluefin Labs social TV data? Leave a comment and share your thoughts.

With 2012 less than a week away, there is no better time than right now to look at what’s ahead in the world of marketing and branding for the new year. JWT Intelligence released two reports that shed insight into the year ahead: 100 Things to Watch in 2012 and 10 Trends for 2012.

Some of the key trends that JWT Intelligence predicts will be hot for the new year include the following:

These trends aren’t ground-breaking or innovative. They’re reactions to how the world is changing and examples of how brands need to adapt to macro- and micro-environmental changes. Brands that don’t adapt will fall behind quickly. However, these trends provide excellent strategic opportunities to leverage the changing world and consumer audience for positive brand growth.

The trick for brands in 2012 and beyond will be keeping up with the changing world and consumer audience. In other words, change always happens, but today, change happens faster than ever. Therefore, brands and businesses must be flexible enough to stay ahead of those changes in order to lead (or at least compete) in the markets where they operate.

Is your brand positioned to navigate through fast-changing consumers and markets in the short-term and beyond? Leave a comment and share your thoughts. 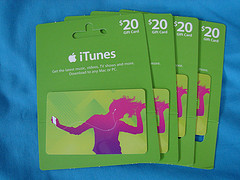 Walmart might be one of the biggest retailers in the world, but Apple is the company with the most online shoppers as of November 2011 according to comScore (as reported by Ad Age).

There is one thing that’s pushing Apple ahead of Walmart — iTunes. Of the 79 million unique visitors to the Apple website from the United States in November, 30% of them came for the iTunes digital content store.

Digital content sales are exploding everywhere, and it’s a trend that’s going to continue to grow. Consumers are purchasing more digital content, including music, television shows, movies, and books than ever. With the skyrocketing sales of the iPad and similar tablet devices, more and more consumers are shifting their media consumption habits to digital content every day.

comScore reports that ecommerce sales are up by approximately 15% over a year ago, but digital content sales are up twice as much. In fact, Ad Age reports that December 25th has been dubbed “Download Day” because so many people are looking for content for the devices they received as Christmas gifts that day. Between December 25th through January 1st is the period each year when the most most digital downloads occur.

The rise of Apple’s iTunes traffic and download sales shouldn’t be surprising to anyone. What’s surprising is that so few competitors are making headway against Apple and the iTunes store. It will be interesting to look at these statistics again next year at this time to see how Apple and competitors are doing in the download market.

Another interesting point to consider is the overall trend toward digital content consumption and how that shift will affect download sales throughout the year. There’s no going back now. Digital is here to stay. Can another company compete with Apple in the short-term? Now is the time for someone to make a move.

What do you think? Who can give Apple a run for the money? Leave a comment and share your thoughts.

In 2006, a cool commercial named “Evolution” got people talking about Dove soap. In the ad, a camera recorded a model from the moment she sat in the makeup chair to photo-retouching of the pictures shot during the photo shoot, and finally, to the ad that appeared on a billboard. The add supported the Dove Self-Esteem Fund and intended to show people that the women in ads aren’t accurate depictions of reality. That ad was a viral hit in 2006 with over 222,000 shares across the web. You can watch it below.

Fast forward five years and the 222,000 shares that the Dove “Evolution” ad received is a drop in the bucket. According to a great infographic from Unruly Media, the most shared ad that became the biggest viral sensation in 2011 was a Volkwsagen commercial which featured a young boy dressed as Darth Vader. Called “The Force,” the ad was shared nearly 5 million times in 2011. Check it out below.

Those numbers are increases from the top viral spreading ads in 2010 where D.C. Shoes took the top spot with just over 2.6 million shares. Budweiser, Nike, Old Spice, and Toyota followed with between 1 million to 2 million shares each.

The viral spread of ads has taken on significant importance to brand managers. Instead of simply looking at online video sharing as a nice extra to get some extra mileage out of an ad, brands are developing ads and related marketing campaigns with the intent to leverage online video sharing.

You can see the complete infographic below. Click on each image to open the ad video in a new window or tab. Hover your mouse over each image to bring it to life.

What do you think? Are you planning commercials with an online video push component included? Leave a comment and share your thoughts on the viral spread of video ads. 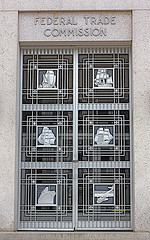 In June, word got out that the U.S. Federal Trade Commission (FTC) planned to ramp up its investigation into Google’s position as the biggest and most powerful search engine. On Monday, the leaders of the Senate antitrust subcommittee delivered the results of their ongoing investigation to the FTC, and the results don’t look great for Google.

Of course, common sense tells you that it’s highly unlikely Google can deliver unbiased search results when its entire business strategy in recent years has been to try to make people Google-dependent by surrounding them with integrated products. The launch of the +1 button and Google+ don’t help Google’s case at all.

The subcommittee said as much in its letter to the FTC:

“Google has a strong incentive to bias its search results in favor of its own offerings. Rather than act as an honest broker of unbiased search results, Google’s search results appear to favor the company’s own web products and services.”

You can read the full letter to the FTC here.

Google’s response was exactly what you’d expect. The company spokesperson glossed over the importance of the investigation by saying people have a choice in the search engine they use and Google is “committed to competing fairly on the Internet’s level playing field.”

This story is far from over, and it’s a very important one. The results of the investigation could be widespread in the United States and around the world. Earlier this month, the Financial Times reported that the European Commission is expected to release a 400-page document detailing its own antitrust allegations against Google in early 2012.

The problem that the U.S. Senate subcommittee and the FTC have with Google is not its dominance in Web search. The problem is in Google’s possible use of its position as market leader to drive people who use its search tool to its own products and services rather than providing unbiased results that put all websites and competitors through the same ranking criteria and on a level competitive playing field. Doing so without clearly disclosing it would be a violation of antitrust laws. Antitrust laws are intended to protect the free market by prohibiting anti-competitive behaviors and business practices for the benefit of consumers.

What do you think about these investigations against Google? Agree? Disagree? Leave a comment and share your thoughts about the company and brand that has become a household word for Internet search and allegations of antitrust law violations.