Where are you investing your marketing budget in 2011?  If you want your brand to be in the right places, then you need to consider the shifting media usage trends that will define 2011.

According to research by eMarketer, television, video and Internet content consumption still dominate media usage among U.S. adults as follows:

Are you investing your marketing budget in the media where your target audience spends time?  Compare your spending to the usage statistics above and see if you have any glaring disparities that should be modified before 2011 begins.

How has media usage changed over the past two years for U.S. adults?  That’s another area you need to research and understand to ensure you’re investing in the right places in the new year.  Take a look at the chart below to see how the amount of time on major media changed in 2009 and again in 2010.

Mobile is certainly the media opportunity to leverage in 2011.  It’s undoubtedly true that mobile devices will only continue to steal time from other media as tools and technologies get even better.  Of course, you have to match your spending to your target audience, but it’s safe to assume that few industries will be immune to the media shift to mobile over the next few years.

What do you think?  Are you shifting marketing budget investments to mobile in 2011?  Leave a comment and share your thoughts on these media usage trends that will dominate 2011.

Unfortunately, a number of big brands made some big mistakes in 2010.  With each mistake that makes the news, there are things marketers and brand managers can learn and apply to their own initiatives.

Instead of focusing on the negatives of 2010, let’s take a look at five of the biggest lessons we can learn from some of the biggest mistakes brands made in 2010.  Keep in mind, the lessons to learn may or may not reflect the company’s actual response in each of the examples below.

Who could forget the biggest environmental disaster in the United States during 2010 — the BP oil spill in the Gulf of Mexico.  The lesson to learn from BP’s mistake is this: be vigilant, move quickly, be honest, and ask for help.

Toyota’s brand reputation had never been better until a series of recalls in 2010 tarnished it.  The lesson to learn from Toyota’s mistake is this: admit your mistakes and go above and beyond to fix them.

Facebook continues to grow in popularity despite being called out numerous times for violating users’ privacy.  The lesson to learn from Facebook’s mistake is this: ignoring a problem and thinking you’re too big and great to care might work for a while, but it is not a strategy that will work in the long term.

Apple’s iPhone 4 was released with much buzz but problems ensued — something the brand hadn’t needed to contend with in the past.  The lesson to learn from Apple’s mistake is this: the good times can only last for so long and denial only makes those mistakes look bigger when stories travel across the Web so quickly these days.

Google Buzz was touted as a new way to start conversations about the things people find interesting within Gmail, but it did not live up to the hype.  The lesson to learn from Google’s mistake is this: no matter how big you are, sometimes people like what they’re already using more than they might like you.  Your product has to be better because they won’t just switch for your name.

What do you think were some of the biggest lessons to learn from brand mistakes in 2010?  Leave a comment and share your thoughts.

According to Ad Age’s weekly Trendrr data, Christmas week was a busy one for foursquare check-ins — although check-ins did not reach previously set peaks.

Only two of the brands in the top ten for the holiday week saw a decline in check-ins from the prior week. Of the top ten retail brand check-ins on foursquare during that week, three were food and beverage chains and 7 were consumer products and electronics retailers. Interestingly, it was the food and beverage brands that saw a decline in foursquare check-ins while all consumer products and electronics retailers saw increases in check-ins (as much as a 25% increase for Macy’s).

You can see the breakdown of the top 10 retail brands for foursquare check-ins below:

Earlier this year, Starbucks was the first retailer to partner with foursquare to offer a national program where local check-ins can earn users “mayor” status, which they can use across the United States.  And in October, Starbucks launched its new Digital Network in stores that offers content (including foursquare check-ins and more) aimed to enhance the in-store experience for customers.  With nearly three times as many check-ins during a single week as the next closest brand, Starbucks is doing something right with foursquare as far as its customers are concerned.

Location-based marketing offered through tools like foursquare are hot right now, but the recipes for success are still unknown.  As your brand looks to implement geo-targeting and mobile marketing initiatives, check out what the ten brands listed above are doing.  You’ll undoubtedly learn from them.

What are your company’s plans for location-based and mobile marketing in 2011?  Leave a comment and share your thoughts on these opportunities for the new year.

If you want to get a positive brand boost, get your company on Undercover Boss — a television show on CBS in the United States that sends company presidents and other leaders undercover into their own companies to investigate it from the inside.

Rounding out the top 10 are:

What do these top 10 lists tell us about consumers, brand perceptions, and marketing trends?  First, transparency is paramount in consumers minds as the popularity of Undercover Boss in terms of brand opinion demonstrates.  Second, humor always works when it comes to building a positive perception and being remembered.  Third, appropriate product placements and commercials that support a brand’s promise are far more effective than placements and commercials that run counter to a brand’s promise and risk confusing consumers — or worse, angering them.

What commercials and television brand placements from 2010 stick out in your mind as being likable?  Leave a comment and share your thoughts.

Brand naming company Catchwords put together a visual representation of the catchwords that dominated American culture in 2010.  The company compiled the names and words that defined 2010 both positively and negatively and put them together in the graphic shown below. 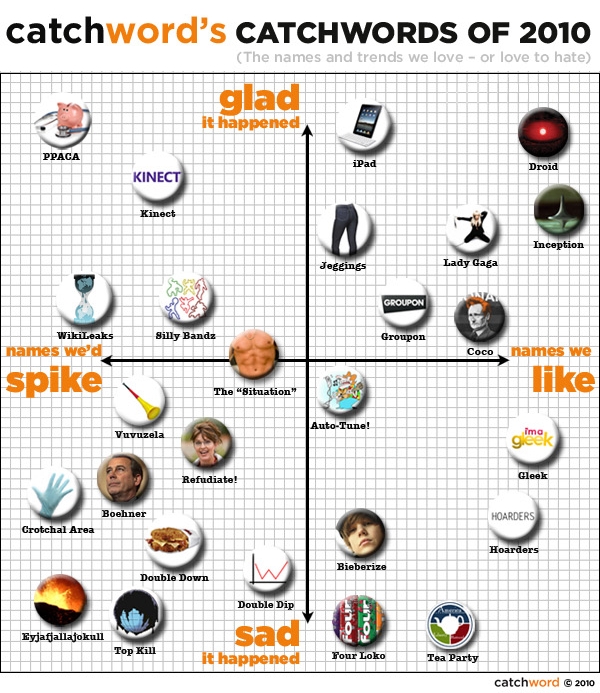 I’d be curious to learn how Catchword determined which words and phrases made it on this list.  I haven’t heard of several of them, so I’m guessing the demographic must skew in a specific direction.  Regardless of the audience demographic, there are many words and phrases on this chart that everyone can relate to — whether we want to or not.

Which brands on this graphic stand out to you?  One interesting point is that most of the brands on the graphic are in the “glad it happened” area even if the specific brand names were rated as “names we’d spike.”

What brands do you think stood out from the crowd in 2010 and became catchwords?  Leave a comment and share your thoughts.

Read more about brands that made headlines in 2010.