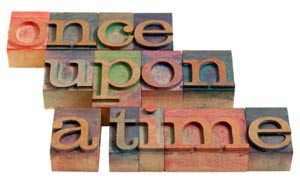 Are you sitting comfortably? Then I’ll begin.

Once upon a time…

Everyone loves a story, even as an adult (though you may not all be old enough, or British enough, to recognise my introduction).

Maybe there’s less oral story-telling these days; maybe fewer people read stories in print. But we often watch people enact stories on a screen or a stage, and it may be that story-telling will be taken up by other media, or many media-streams simultaneously, in the future.

I recently received a review copy of Tell to Win by Peter Guber (out this week, and Kindle edition available now from Amazon – if you want a physical copy and live in the UK, you’ll have to wait).

Just like my introduction to this post, the book is culturally specific, and as a Brit I had to work harder to get the point in some places, but it is a quick and easy read. His key message is about the importance of story-telling, and he certainly has a wide range of stories to tell – many, but not all, from the entertainment, sport and media sectors.

Naturally, you’d expect stories from these industries, which stereotypically contain strong, creative characters. However, some of these stories are business-based and highly relevant to corporate communications, whatever the type of story being told:

And this is, of course, what we’re interested in here at Corporate Eye.

Several aspects of the lessons Peter teaches through his many stories correlate with themes that our criteria are designed to tease out of a corporate website, such as how to communicate transparency and trustworthiness.

Of course, some companies are more explicit in telling stories about themselves than others. But company stories are more than just stories about their company origins, or about individual products. They can be used to convey something of the company culture and values, of the corporate behaviour and vision. And every story told about a company adds something to the skein of stories, whether it is a CSR case-study of a community programme undertaken by the company or a video profile of a new graduate employee talking about their first few months at the company – or a customer-service story told by a customer on Twitter.

For me, the most interesting chapter comes right at the end, when Peter talks about a Papuan storyboard.

This is literally a board, decorated with pictures which make up an outline of the story: of the core message and impact to be conveyed. Stories change as people tell them, each adding variants and emphases according to their own interests and back-story; the storyboard is an aid to keeping the core story and messages consistent.

We’ve talked before about the importance of the corporate site as the hub (or repository): perhaps we can see the corporate site also as an equivalent to the Papuan storyboard, keeping the stories consistent, being the stable reference point in a series of overlapping and entwined stories.

Mark Hill of The Group, in our recent interview, talked about the authenticity generated by many voices telling related stories (go and listen, if you haven’t already). The essence of a company, after all, could be revealed in the common strand of story.

Of course, the company doesn’t have control of all the stories told about it, but if it isn’t listening to the stories told, or trying to tell its own stories, then, according to Peter Guber, it may seem to lack credibility or authenticity. He argues that credibility and authenticity can be enhanced by online engagement – and assessed by quantifying your social capital.

“the Internet represents the greatest story telling technology since the development of language. It will be far more important than reading and writing as a purposeful tool. Everything that is enabled by story telling will be enabled by the Internet.”
(Bran Ferren – Applied Minds)

Interesting. What do you think?