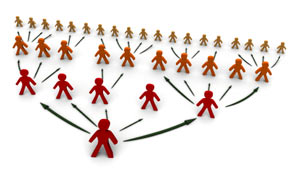 For many, the main take-away from the Social Media in a Corporate Context conference in Manchester this week will have been the importance of setting proper, targeted, objectives if you’re planning to venture into social media.

That was certainly emphasised by many of the speakers who were sharing their experiences. As an example, at the follow-on workshop, Cision asked ‘how many sales from a page with 7 likes?… with 203 likes?… with 2037 likes?’

The answer, of course, was zero in all three cases, because Facebook likes don’t easily translate into sales. You do need to be using the right measures, and aiming for suitable targets – which won’t be the same for all companies.

There was a lot of great material shared at this conference; if you weren’t there, make a note to check out the next one. This was my third, and I still came away full of ideas triggered by people sharing their perspectives and experience.

For me, though, there were three slightly different angles of interest in this conference.

The first is the increasing significance of SEO in using social media for corporates. Now this is probably a conference subject all of its own (and if it isn’t it should be) but I got the clear impression that more people were carefully crafting their uses of social media for search engine optimisation than they used to. And not as an add-on, either, but as an integral part of their communications strategy.

As an example, Lloyds TSB Commercial Finance explained that most of their traffic came in from searches using their brand name, indicating that these visitors were already at the bottom end of the Awareness / Interest / Desire / Action sales funnel: aware of them and ready to buy. Lloyds TSB Commercial Finance decided that they wanted to increase the number of people at the Awareness stage, and developed a tactical plan to derive social media content suites from each press release (e.g. 50 tweets, 5 Facebook updates…). Great idea.

And I loved Cision’s suggestion of a ‘keyword bible’, to be used for all communications (yes, including press releases) and to stand alongside the style guide, tone of voice guide and social media policies.

The second is the importance of transmedia storytelling to convey corporate messages: using all channels available to convey elements of the corporate story, using each medium as appropriate, and telling a consistent but not repetitive story, revealing corporate culture by showing rather than telling, and using each medium to reinforce the story and move it on.

A good example here was Reckitt Benckiser who shared their Powerbrands Facebook game story with us: they use the game to raise awareness of the company among their target audience of students and people in their early careers, while conveying the corporate culture of high performance and innovation through the game. Astonishingly, they have 161,000 monthly users, of whom 60% are in their target audience (and 20% will be in the target group when they’re a bit older). The fact that the game reinforces the corporate culture while their audience is in ‘play mode’ (rather than ‘career research mode’), is a brilliant move.

The third is the the changing relationship between journalists and the corporate communicators. Some of the key points made in various different sessions over the last two days included:

And there were more… We all know that the business of journalism and publishing is changing; it was very interesting to hear from journalists in the field about how the changes were affecting their work day to day.

Expect us to come back to these three topics again, because there’s a lot to unpack in those three alone…