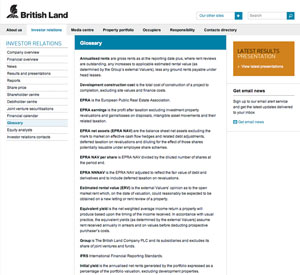 All businesses have specialized terms that they use in describing their business. In itself, there is nothing wrong with this, as such terms serve as a convenient shorthand and relieve the reader of the tedium of continually having something explained to them that they already know.

Things become a little murky however, when the shorthand terms get further reduced to acronyms and the reader is left wondering what the latest three or four letter combination means. It seems that the more specialized the industry, the greater the number of terms and acronyms get tossed around.

To take a simple example, in retail, comparable store sales, a common measure of sales for stores that have been open for a year or more are sometimes referred to as comps, same store sales, SSS, identical store sales and idents.

There is a simple way to deal with this issue, although it does take some effort as it is not something your standard investor relations web site provider is likely to have ready to hand to you off the shelf. Companies with a need to explain their language to investors should create a glossary of terms and include it on their website. Clear and concise definitions can be set forth that will put the investor’s mind at ease that they understand what is being referred to in the discussion of operations.

A good example of how to do this is on the web site for the real estate developer and manager, British Land. Anyone that has ever dealt with real estate people will tell you that they tend to speak a different language. The concepts are the same as in classic finance – cash flow, returns on assets, capital and so forth, but they give everything a different name. So a glossary for the non-specialist is very helpful. And as you can see from the screenshot above, British Land does a nice job setting out explanations for the terms they think you ought to know. More companies should consider incorporating something similar into their IR web presence.