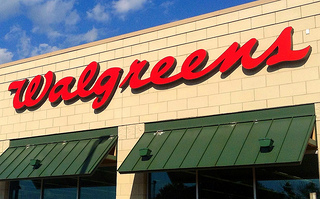 Earlier this year, Google announced Project Tango, an effort with a specific goal—“to give mobile devices a human-scale understanding of space and motion.”

In partnership with research labs, industrial partners, universities, and more from nine countries, the Project Tango team is using the past decade of work in robotics and computer visioning to develop a mobile phone that can scan and map 3D environments.

Google is also working with professional developers to find innovative ways to turn these new capabilities into useful applications.

For example, the video from Google below suggests using the new technology to assist the blind, to determine if furniture will fit in your house, and more.

Fast forward to this week and Google’s Project Tango is already being used in some Walgreens’ stores in the United States. Retail mapping company, aisle411, developed unique mobile technology with Project Tango that enhances customers’ in-store experiences. Walgreens is the first store to roll out the new technology.

In simplest terms, Walgreens customers can access a mobile device affixed to their shopping carts which maps the entire store and displays discounts and special promotions as shoppers pass them. Customers can also passively earn loyalty rewards when they walk by specific products in the store, and they can actively find products by typing them into the mobile device.

You can see how the technology works in Walgreens stores in the video from aisle411 below.

In Walgreens stores, the technology displays personalized coupons, offers, and rewards as well as standard offers. As a customer walks by an item, it pops out on the device screen, so they can quickly review the offer and determine if it is one they want to purchase or not. What makes this technology so revolutionary is the passive nature of it. Consumers don’t have to do anything except walk up and down the aisles in a Walgreens store to access discounts and earn loyalty rewards.

According to a press release from aisle411, the Project Tango technology is being piloted in a number of major retailer locations (including Walgreens). Each participating store will use the augmented 3D maps as well as in-store experiences that are meant to engage consumers as they’re shopping.

It seems safe to say that this is just the beginning, and the brick-and-mortar retail experience is poised to change significantly in the near future, particularly in terms of the integration of mobile and real-time engagement. The opportunities for brands are significant!

Google+ will be three years old on June 28, 2014 (Google+ brand pages won’t turn 3 until November 8, 2014), and a new infographic from DPFOC is filled with facts and stats about Google’s latest attempt at social networking.

Google+ also has a more targeted demographic of users — predominantly males in technology or related fields while Facebook’s users come from all fields and are split almost 50/50 between males and females. Google+ also suffers from poor navigation that makes it seem more intimidating and less user-friendly than other social networks.

However, those negatives only tell a small part of the story for Google+.

Looking on the positive side, Google has seen great success in using Google+ as a tool to support its social search functions and to integrate its various products more closely. Google has also gotten far more information about users from their Google+ profiles and use of the Google +1 button across the web. According to the infographic, the +1 button is used over 5 billion times each day and websites that use the +1 button have three times more visits on a daily basis than sites that do not use the +1 button. Furthermore, the average Google+ user spends 12 minutes on the site per day, and the Google+ mobile app was the fourth most used mobile app in the latter half of 2013.

In other words, Google+ might be a long way from competing with Facebook, but that doesn’t mean it hasn’t been a success for Google. Remember, Google’s core brand mission isn’t to be the world’s biggest and most popular social network. It’s to organize the world’s information. Google+ is just one part of making that mission a reality.

What’s ahead for Google+? Only Google knows the answer to that question despite the many rumors that have circulated in recent months (some of those rumors are mentioned in the infographic). One thing is for certain, Google won’t hesitate to kill a product that isn’t adding value to its mission. However, Google+ seems to have more value to give. What do you think?

You can see all of the statistics in the infographic below. 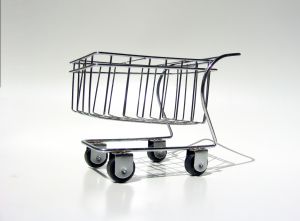 These are just some of the interesting statistics from the third annual UPS Pulse of the Online Shopper™ Study. A total of 5,800 U.S. online shoppers were surveyed for the 2014 study.

While survey respondents were more likely to research products and buy online, they were still reluctant to do both activities using mobile devices. Respondents ranked four key reasons why they prefer to shop using their computers rather than their mobile devices:

These statistics show that it’s not privacy and security that is keeping many consumers from purchasing online but rather, it is a poor user experience. When asked what mobile shopping-related activities they do using their mobile devices each week, survey respondents ranked the following four activities:

User experience is critical for retailers to motivate consumers to make purchases using their mobile devices, but it’s important to point out that the online shopping experience isn’t perfect yet either. When asked to identify the most important options retailers should provide when checking out online, survey respondents ranked free shipping far above any other option (81%). Coming in second and third were providing estimated delivery data and shipping costs early in the process for convenience (63%) and providing an estimated or guaranteed delivery date (62%).

Overall, the majority of U.S. consumers who participated in the UPS and comScore study were satisfied with the online shopping experiences offered by retailers today, but there is a lot of room for improvement. For example, the highest ranked purchase experience aspect was the ability to see the expected delivery dates of products. A total of 72% of respondents indicated that they are satisfied with this aspect of the online shopping experience offered by retailers today, but that means 28% (nearly 1 out of 3) is not satisfied. Ranked second in terms of consumer satisfaction was ease of checkout (1 or 2 clicks). A total of 68% of respondents were satisfied with the ease of checkout provided through online shopping experiences, but again, that means nearly 1 out of 3 consumers is not satisfied.

Bottom-line, the online shopping experience is far from perfect, which makes the shift to mobile shopping experiences even more challenging for retailers and consumers. Use the data provided in these types of research studies to improve the user experiences delivered by your brand, and online and mobile sales should increase. 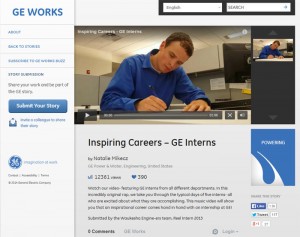 GE promotes a video created by interns at GE (after a month) on the University Students landing page.

This video not only promotes their internships as valuable experience for students, but also reiterates the ‘imagination / inspiration’ keywords of the GE brand. 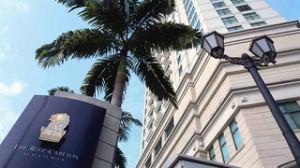 As you can see from the problems listed above, there is a great deal of room for improvement for luxury hotels’ mobile websites, particularly since 83% of luxury hotels simply transfer their desktop sites to the mobile environment. Many of the features that consumers actively look for, such as reviews and full-screen images, are offered by online travel agent sites. Furthermore, most luxury hotels’ mobile sites don’t provide auto-filling of information for forms. Booking a room and having to re-enter information multiple times using a smartphone creates a terrible user experience. It’s not surprising that the majority of mobile consumers book hotel reservations through an online travel agent. Kayak and similar sites offer all of the features that consumers want when booking travel, and it’s all easily accessible in one place.

Not only are luxury hotels missing the mobile opportunity by creating inferior mobile sites, they’re also missing out on traffic and conversions. According to L2, 94% of first-page booking listings on Kayak are filled by online travel agents. Only 1.3% are luxury hotel brands. Considering there were 1.6 billion searches conducted on Kayak last year, you can bet that the lack of first page listings for luxury hotels resulted in significantly fewer direct bookings.

Even mobile apps are imperfect for luxury hotel marketing. Property-specific apps can look great and offer many unique features, but a company with many property locations would need to create separate apps for each property. Not only is this cost prohibitive, but few consumers would download more than a few apps from the same hotel brand. Creating a single app for all properties poses its own set of problems. The number of clicks to find information and book a room must be minimized, all content must be up to date, and speed, convenience, and security must be front and center for consumers.

The good news is that 89% of luxury hotel brands plan to invest in mobile sites in 2014, which is up from 63% in 2013. However, those investments won’t help boost sales significantly unless the new mobile sites offer the features listed above that consumers want and are used to getting from online travel agents. 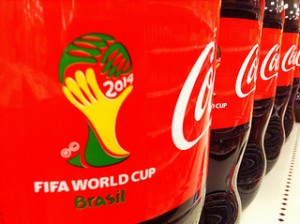 Crowdsourcing isn’t just for raising money for startups and personal projects anymore. Today, crowdsourcing is an important part of brand marketing. Not only can you crowdsource content for your brand’s blog, Facebook Page, and so on, you can also crowdsource for marketing campaigns.

Many brands are having great success using crowdsourcing as an integral part of recent marketing campaigns. Two excellent examples are discussed below—Coca-Cola and Bic.

In the months leading up to the 2014 World Cup in Brazil, Coca-Cola launched a campaign to create the Coca-Cola Happiness Flag. The flag would be created as a mosaic of photos submitted by people around the world. Artists would use these images to create one giant flag. Together, the photos would look like a single, large image, but up close, all of the individual photos would be visible. Ultimately, people from over 150 countries submitted photos to the HappinessFlag.com website, and millions of photos are included in the final flag, which includes over 3600 square meters of printed material.

Coca-Cola’s strategy was to involve as many people in the campaign as possible. On the day the flag was revealed at the 2014 World Cup, everyone who submitted a photo received an email message so they could see their photo in the actual flag and as well as a digital version of the flag on the website. This way, Coca-Cola hoped to involve everyone in the final results of the project both physically and digitally, even if they couldn’t be in Brazil to see the flag in person.

The video was created earlier this year to drive excitement for the campaign.

Bic launched its own crowdsourced marketing campaign this year to promote hitting a company milestone by producing 100 billion Cristal Ballpoint Pens. As the best-selling pen, Bic suggests that it could be called the “universal pen,” and if it a pen can be universal, Bic asks what a universal handwriting would look like.

To find out, the company launched a website, TheUniversalTypeface.com, and invited people to enter their handwriting using a smartphone or tablet touchscreen with Mobile Connect technology to help Bic create the Universal Typeface. Each handwriting submission was run through an algorithm that calculates average based on statistical differences and similarities. The results are then aggregated to create the Universal Typeface, “one ever-changing, always evolving font,” which will will be downloadable in August. To date, people from 76 countries have submitted writing samples to the website.

The video below was developed to promote the campaign.

As Bic and Coca-Cola demonstrate, crowdsourcing can be very effective in building content and generating buzz. Don’t be afraid to get creative in leveraging crowdsourcing for your brand marketing.