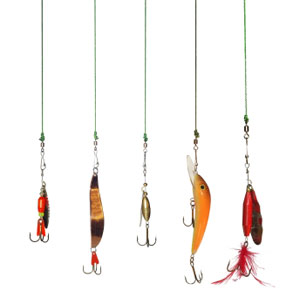 In marketing there is a concept known as the “hook”, which is the theory that a product or service needs to have a catchy saying or phrase to grab customers’ attention. An extreme example of this is the story about American popular/country singer Mac Davis who after one of his songs was rejected by his record label because it didn’t have a hook, got mad and wrote the song, “Baby Don’t Get Hooked On Me” which went on to become a number one hit for him in America in the 1970s. The relevance to this in investor relations comes in two forms. First, a company’s stock is marketed by the sell side to the buy side through very compressed information bytes followed by extensive research. Second, differentiating your company often requires that you find a simple way to express complex strategies.

If you read the blog post preceding this one, you may recall that a sell side analyst, after much work to produce an industry piece, has exactly 3 – 5 minutes on the morning call to compress his investment findings to a viable investment thesis to his sales force. The sales people, in turn, usually have 60 – 90 seconds to present the idea to buy side analysts and portfolio managers when they call them to pitch the idea. If the investment idea can’t be expressed succinctly within those compressed time spans, chances are that investors will move on to the next investment idea.

So the takeaway here is to find a concise, pithy description of your company that captures its most salient points and work at getting the Street to think of it when they think of your company. It’s another form of branding, but expressed in a more subtle way. To take an example from the energy industry, if your company has the engineering technology to take on exploration in the harshest environments and situations that other companies can’t approach, then that is the first thing you want investors thinking of so that you can stand out from a crowded field.

This concept should also be applied to other differentiating aspects of your business. Sometimes the product offerings of companies are clearly differentiated by price or service levels, but other times the difference is not as clear-cut. For example, many years ago I worked for a drugstore chain, a retailing concept that has many competitors that sell much the same merchandise. Discount chains such as Wal-Mart and supermarket chains such as Kroger all offered not only the same types of general merchandise and over-the-counter medications but even offered prescription departments where you could get your medications.

The question that constantly came up was “If everyone is selling the same products, what makes you different?”

In this case the hook is not so much about getting information out quickly, but more about creating a phrase that will stick with the investor. The catch phrase we came up with to describe the differentiating point of our business was “We sell healthcare and convenience.” We followed it up with factoids that showed how our customers were in the store 15 minutes or less and bought fewer than 5 items. This clearly set us apart from the big box retailers and gave investors a mental picture of why customers viewed our stores as a different shopping experience.

In short, snappy catch phrases are not just for the marketing department. Marketing also occurs at the investor level.

Just when you thought Myspace was gone forever, it’s back in the news and looks better than ever. Earlier this week, Myspace investor Justin Timberlake (yes,that Justin Timberlake) tweeted a video introduction to the new Myspace, which you can watch below. Gone is the terrible logo that replaced an icon of people with a line in 2010. The new logo re-introduces Myspace as a brand focused on people and relationships. It’s simple and nostalgic.

The new design of the Myspace website and user experience is sleek, image-heavy, streamlined, and less clunky than Facebook. The question is whether the redesign, combined with the reach of Justin Timberlake, can convince people to return to Myspace or try it for the first time now that they’ve gotten a taste of social networking on Facebook.

There is no denying the fact that many Facebook members are not happy with recent site redesigns, advertising, intrusive apps, and a lack of privacy. This is business, and there is always room for competition. If the new Myspace meets the wants and needs of consumers who are tired of the Facebook experience, the site stands a chance to carve out some market share.

Interestingly, the new Myspace connects with Twitter and Facebook, as you can see in the introduction video. In that regard, Myspace isn’t trying to compete directly against the biggest social sites but rather trying to complement those sites. Is there room for another player in this market? Early buzz based on this quiet pre-launch video is positive, but there are still detractors who view Myspace as operating from a position of desperation rather than innovation.

I’m still rooting for Myspace. I hate to see a powerful brand deteriorate. I have hope for the Myspace repositioning but only time will tell if consumers buy into it. What do you think? 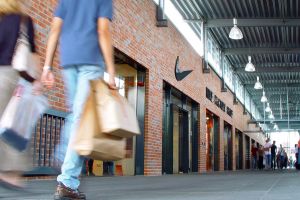 The Fitch 2012 Joy of Shopping study reveals that 54% of shoppers prefer to do their shopping in brick-and-mortar stores over any other channel. 50% of respondents to the global survey indicated that they prefer to shop on the web. Both channels rate significantly higher than mobile app shopping (13%) and social media shopping (7%).

However, there are some regional differences in consumers’ preferred shopping channels. Internet shopping is far more popular in emerging markets like China and Brazil than it is in mature markets. Furthermore, while the Chinese are the happiest and most enthusiastic shoppers (55%), Brits are the most unhappy shoppers in the world. Only 21% of British respondents to the Fitch survey claimed that they enjoy shopping.

Fitch offers some suggestions for increasing retail shopping satisfaction and enthusiasm levels to help businesses succeed in the future:

You can read the complete report here. Which isn’t surprising.  The country’s home to Al-Ghawar, the world’s largest oil field which pumps out a stonking 5 million barrels of crude oil per day.  Ironically (or perhaps fortunately?) it lies under the world’s largest single stretch of sand, the Rub’ al-Khali or “Empty Quarter” which covers over a quarter of the country.

All of which gives me pause for thought.  Part of CSR and the business sustainability agenda is to create robust and socially inclusive economies.  Saudi Arabia’s economy is pretty well single industry and, to put it delicately, it’s not renowned for being particularly socially inclusive.

So when I “met” Bushra Azhar on Twitter, founder of Middle Eastern business sustainability consultancy Good Business Sense and based in Saudi Arabia … well, I just had to get hold of her and ask her all about it!

END_OF_DOCUMENT_TOKEN_TO_BE_REPLACED It’s easily forgotten that the recruitment process is a two sided affair. Though it’s primarily a way of attracting appropriate people into your business, it’s also your chance to make a good first impression. Many graduates will have had only a taste of the sort of workplace they’re applying for, and the type of application form or interview experience they receive will really set their expectations.

If thought is given to the recruitment process, the benefits can be twofold: not only are your applicants given a positive impression of your company at the outset, but you’re more likely to appeal to creative and thoughtful graduates. Here are a few tricks that market leaders are already using to appeal to the top talent in the country:

Allow your Recruits to Flourish

Most people are familiar with the form of an ‘open question’, but even they generate rigid and homogenous answers. Anything can be done with the right technology, so why not request your applicants to upload a portfolio to a Tumblr feed, post a trial blog article on WordPress or just show off their organisational abilities using a spreadsheet master.

Don’t be afraid of Flash

Flash elements in web pages can get incredibly complex and be a great hindrance to an interviewee, but when done well, an interview process that integrates Flash can work wonders. Consider using Flash to simulate the sort of tasks your recruits might be doing and to test cognitive ability. Always make sure anything you use is well designed and compatible for all users.

It might sound mad, but creative graduates will pick up a call for applications on Twitter and they will respond quickly. Even in 140 characters you can ask applicants to send through a CV or portfolio and provide an email address. This both encourages applicants to act quickly and it shows that your business is dynamic and a little bit bold.

Keeping the application process creative demonstrates from the off to your recruits that you’re prepared to invest time and thought in finding the right people for your organisation. At the same time, it’s possible to tailor a task that allows you to see through the CVs and get a feel of the individual behind the application.

Last week, Twitter rolled out its new header photo design feature for user profiles. Now, all Twitter profiles can include not just an avatar image, but also a large header image that appears at the top of their profile timelines, similar to the Facebook cover photo design.

Imagine a bakery with a Twitter header photo filled with delicious treats or a high-end jeweler displaying its beautiful designs. Already, brands like Starbucks and Vanity Fair have rolled out Twitter header photos that show their products in very different ways. 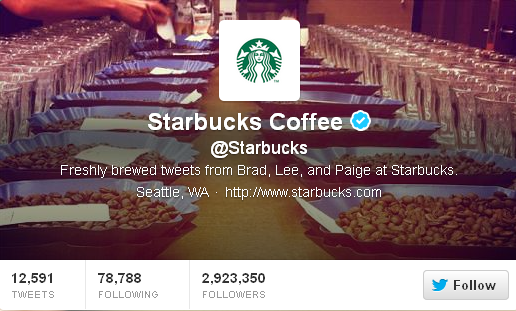 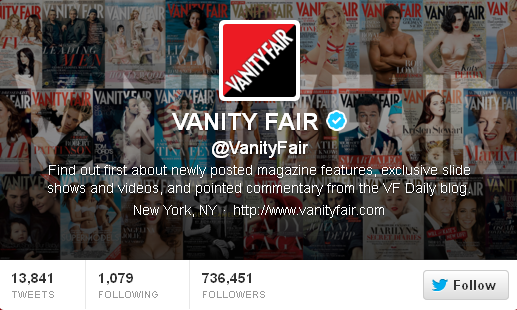 2. Show Your Employees and Offices

What better way to make your brand more human than by showing your employees in your brand’s Twitter header photo? It’s a smart move for a brand like Ford. You can also give your audience a peek into life at the company and people behind the brand by displaying photos of your office or working environments. Take a look at the Twitter header image from The Huffington Post below for a great example. 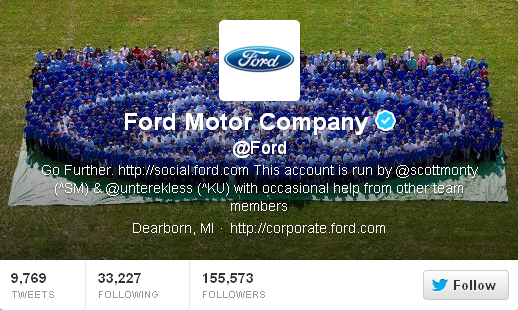 Service organizations and non-profits might not have tangible products to display in their Twitter header photos, but they can show photos of what they do. Check out the Twitter header photos for Charity: Water and Greenpeace to see what I mean. Also, take a closer look at the Greenpeace header image and you’ll see a clever design trick where the avatar image matches up exactly with the larger header image behind it. Instead of using the organization’s logo, like most companies and organizations do in their Twitter profiles, Greenpeace focuses more on the brand’s mission in its avatar and header photo. 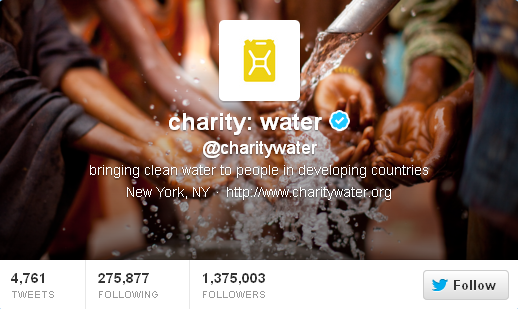 Brands like Nike and Red Bull use inspirational and motivational images in their Twitter header photos, which reflect the brands’ promises. These are brands that connect with consumers on an emotional level, and the decision to use visuals that represent the brand promise rather than products is a smart one for both brands. 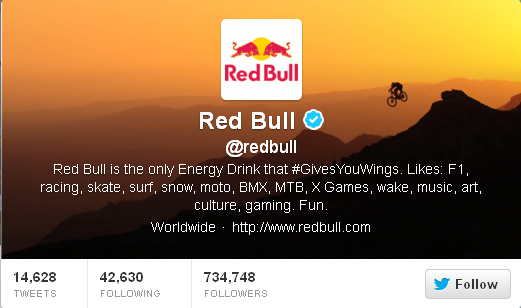