In an effort to keep British programming from turning into U.S. versions of American Idol and Survivor, which are filled with product placements, there are some restrictions for advertisers who want to see their brands in British television programs.

But that’s not all of the restrictions. Paid product placements are not allowed to take center stage in any program, nor can they be part of the program’s plot or script. Furthermore, any program that includes paid product placements must display a small P in the corner of the screen at the beginning and end of the program as well as before and after commercial breaks.

In the U.S., unless a show is overflowing with blatant product placements (e.g., when contestants on Survivor won a Doritos and Mountain Dew feast after a reward challenge), these paid placements typically don’t draw much concern (or attention). It could be argued that U.S. television viewers have become immune to them. Will the same happen to the British audience (who already sees product placements in U.S. programs shown in Britain)? 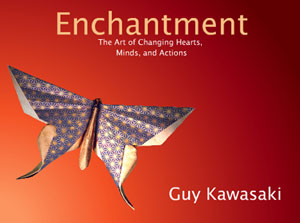 Sometimes – not nearly enough – I am so taken with a corporate website that I want to be part of that company. Something about the way they portray themselves, their culture or their industry appeals.

This isn’t just about the career sites, either. Some companies manage to convey something new and intriguing about themselves in the other stakeholder sections too.

Some of them, of course, deliberately set out to change people’s perceptions of the company as part of a rebranding exercise; others seem to enchant almost accidentally. Part of the enchantment, of course is delight in the unexpected, whether this is crystal-clean copy, information explaining something I didn’t know I was interested in, images showing something truthful and honest about the company culture or site architecture that connects and illuminates.

Since I spend much of my time exploring corporate sites, it’s quite hard to enchant me, so what is it that these rare companies are doing that is so persuasive – and how can others copy this effect? 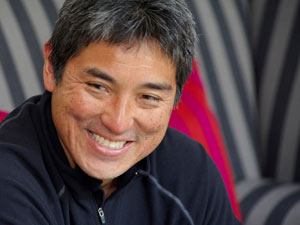 I recently received a review copy of Enchantment by Guy Kawasaki so I thought I’d see whether he could cast any light on this. My copy of the book is now littered with sticky-notes; there are several ideas I picked up for my own use, but there are also key strands I’ve noted that are relevant to corporate websites. I’ve paraphrased Guy’s points, because he isn’t writing about websites, but it is interesting to see how many of his thoughts apply.

None of these strands should be news. But this isn’t easy to implement – we know that – which is why finding sites where it is done well is such a delight. 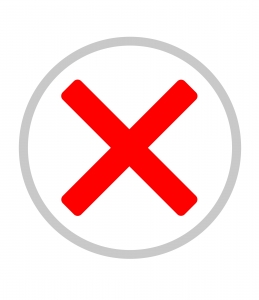 If you’re a U.K.-based company that publishes content online (or shares content published by other people), then you need to know the new regulations from the Advertising Standards Authority (ASA) that came into effect this month.

Before March 1, 2011, the ASA worked as an offline and online paid advertising watchdog. If a consumer came across a paid advertisement that was misleading, dishonest, or otherwise deceptive, they could file a complaint with the ASA who would dish out punishments to offenders. Beginning on March 1, 2011, consumers can now submit complaints to the ASA for content published by companies, too.

For example, if a company publishes a customer testimonial on its website and cannot prove the testimonial is real and comes from an actual consumer, they could be in violation of the new ASA regulations. Another regulation violation could happen if a company republishes or publicly shares content on Facebook, Twitter, etc., that was created by another person or entity and is found to be misleading, dishonest, or otherwise deceptive. In other words, unless online content published by a company is editorial or a press release, it’s subject to ASA policing.

Consumers can file complaints through the ASA website, and companies that are found guilty of violating the ASA regulations will be censured and asked to remove the problematic content. However, if a brand does not comply with that request, the ASA will be publicly named as a “non-complying digital advertiser.” 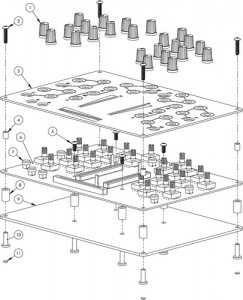 My eldest son, having reached the dizzying age of 11, really kinda worries me.  He doesn’t want to be top of his class and, I have a sneaking suspicion, he deliberately sabotages various tests to ensure he’s not.

Why? Because he’s afraid of being labelled as a nerd.  It’s OK to be in the top class you understand, and he gets rather upset if there’s any suspicion that he’s not.  But not top of that class; that just makes you a social pariah.

Eh. We’ve all been there in our school and professional days I guess, hiding our true thoughts under the bushel for popularity reasons, pretending we’re not quite the person we really are.

Me? I have no such issues anymore and I’m happy to admit to getting rather nerd-ish about companies, their websites and their Sustainability Reports.  Perhaps it will catch on? Who knows…

This is why two websites have caught my eye within the financial sector of the FTSE 100.  Not because they’re outstanding in any way, but because each has its own little nuances which makes it an intriguing site to have a look at.

END_OF_DOCUMENT_TOKEN_TO_BE_REPLACED

Every brand is trying to connect with local audiences, and local coupon and savings websites and mobile apps have exploded in popularity over the course of the past year. Groupon leads the buzz, but a failed buyout attempt by Google last year left the doors wide open for the industry to expand.

Microsoft is attempting to seize the opportunity by going in a different direction than Google (who is rumored to now be looking to launch its own program called Google Offers). This week, Microsoft announced it is partnering with Dealmap, an online deal aggregator, to offer localized deals through Microsoft’s Bing search engine to U.S. users. The video below appeared on the Bing blog with all the details.

The new partnership between Bing and Dealmap brings over 200,000 deals in over 14,000 U.S. cities via both the web and a mobile app for both iPhone and Android devices. Deals come from well-known sources such as Groupon, Restaurant.com, and Living Social. Users can browse for deals by location, business name, keyword, or category. They can also save deals that they find and like, or they can email deals to friends. Of course, they can also claim deals with the deal provider.

Ironically, the new Microsoft and Dealmap service only works on HTML5-enabled mobile devices. That means people who own devices that use Microsoft’s own Windows Phone 7 won’t be able to use it. Microsoft claims that Windows Phone 7 should support HTML5 by the end of 2011.

Now, the ball is in Google’s court. We’ll have to wait and see how Google responds, because you know they won’t leave the localized deal platform launched by Microsoft and Dealmap unanswered. If the rumor reported on Mashable in January about Google Offers is accurate, we might not have to wait very long to see the next stage of this story unfold.

There is an old saying in business, “If you can measure it, then you can manage it”. 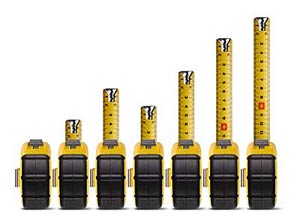 The corollary to this is that if management thinks it is important enough to measure closely then investors ought to know about the measure so they can make their own assessment about how important it is to their ownership of the stock.

Unfortunately, this is rarely the case. There is a whole raft of business literature about using key performance indicators and dashboard techniques to run your business, but when you go looking for them on company websites, they are few and far between.

I am not advocating that investors need to be informed of every operating metric the company generates. This, in addition to being overly intrusive, would result in information overload, as the best companies produce many key performance indicators at all stages of their business. Further, too much detail would result in the revealing of proprietary information to competitors. But often there are five or six key data points that a company watches extremely carefully. These are the criteria that they often base performance reviews and compensation upon. And people will do what they are compensated and rewarded to do. 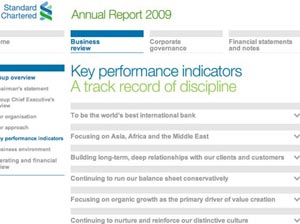 One company that does discuss key performance indicators in their online annual report is Standard Chartered. They do this first with an overview of the areas they wish to highlight, which I’ve set out here (click image to see a bigger view).

When you click on one of the sections such as “Building long-term, deep relationships with our clients and customers”, it opens up to specific KPIs, a portion of which is copied below. The result is a good, quick look at both the measures Standard Chartered thinks important and how they are performing against those measures. 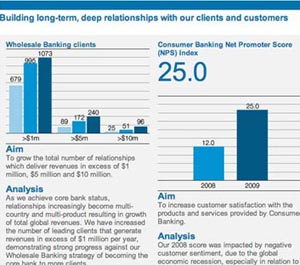 Now if we can just get companies to do more of this and feature it someplace where it is easy to find, investors will more readily understand the way the business is being run.