It’s TomTom and Garmin’s turn to be worried.  Google has rolled out its free navigation service using Google maps available through Motorola’s Droid smartphone (and coming soon to more phones).

It appears Google has done it again.  What do GPS companies have to worry about?  Let’s take a look:

Put it this way — if Google’s new navigation tool for smartphones works well and keeps its free price tag (and becomes available on more smartphones than Motorola’s Droid), there will be little need for anything else.  In other words, the same things that happened with online search, online email, and so on, will happen to GPS.

The question becomes not whether or not Google will be successful in its new venture into GPS, but will any other company be able to challenge Google in that new venture?

According to the New York Times, even the progressive Apple is behind in this area.  Can anyone ever compete with Google?  What do you think?

Xstrata is a major global diversified mining group, based in Switzerland and the UK, that knows how to communicate via its website. Take a look at the Homepage — 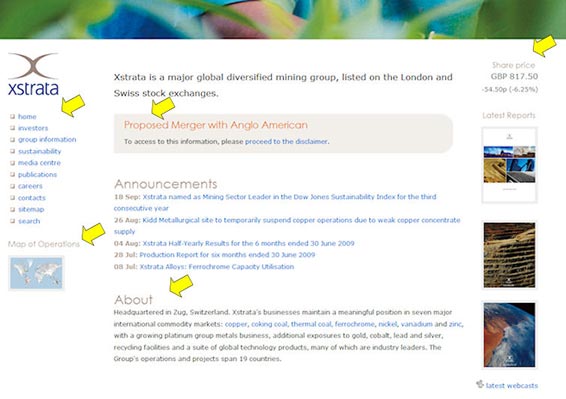 First the abstract image at the top changes; I had to mention this since I like abstracts. The Home page is loaded with information links, but is not overwhelming. The navigation on the upper left is good, the company prominently displays updates on its merger, the About quickly describes the company to new visitors. Finally, stock price and links to reports are available Nicely done.

The company also does a good job communicating the nature of the industries in which they compete. On the Commodity Businesses section you can use the links to more information–

Once again, Microsoft is desperately trying to copy their cooler competitor, Apple.  This time, the company is jumping on the brick-and-mortar retail location bandwagon.  Introducing Microsoft Retail Stores!

There is no doubt that the Apple stores have helped Steve Jobs and friends create one of the most powerful relationship brands by surrounding consumers with another branded experience where they can share the brand they love.  The Apple stores employ cool employees, give free training sessions to new owners, and the Genius Bar is always hopping with satisfied customers getting the help they need and further interacting with the brand.  It’s a fun store to hang out in!

Can Microsoft create anything close to what Apple has developed with its retail stores?

Let’s face it.  Microsoft has a lot to live up to in comparison.  I suppose that’s why the first store, which opened in Scottsdale, Arizona, has a modern design that practically duplicates the design of an Apple store.  I guess Microsoft copied Apple’s Mac Guy vs. PC Guy commercials, so why not copy their stores, too?  Check out the similarities in the exterior and interior pictures of the Scottsdale Microsoft store below.  Incredibly similar to an Apple store, wouldn’t you say? END_OF_DOCUMENT_TOKEN_TO_BE_REPLACED 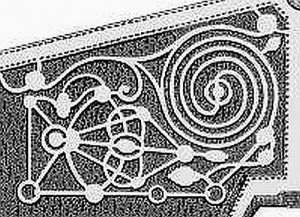 I recently took a rather twisty trip through the website of a “membership organization, think tank and educational resource.”  I was trying to access a report,  and since I do that sort of thing a lot—for an assortment of different topics I write about– I’m pretty accustomed to the various strategies utilized to extract (a) information about me, and (b) money from me.  But some extra challenges made this attempt worth a post.

The following comments are not about this particular organization, which is not only respectable but also provides value.  It’s just that their website offers an excellent example of the “unfortunate user experience.”

Now here’s why all that is important—and relevant.  This website committed several offenses against the user, and the organization lost brand credibility in the process.  Notably:

Your company’s Careers site is probably not in danger of seeming too much like a store.  But it may well be violating expectations in other ways, as well as causing unnecessary inconvenience and delivering mixed messages.   Those failings won’t deter people who need a job from searching the posted openings.  However, they will be a discouragement for quality candidates in search of career opportunities with a quality company.

The site I’ve been critiquing actually had some very good information to offer, once I figured out how to work the system.  So I’ll visit again—but I won’t look forward to it.

(The illustration is a plan view of the garden at Chateau de Choisy, a seventeenth-century French palace.)

There are several ways to address this need for investors. The Telephonica site includes one that I think is well done. Reproduced below is a page that pops up when you click on a link for historic price data. Note that the page also allows you to enter different dates to customize the information. 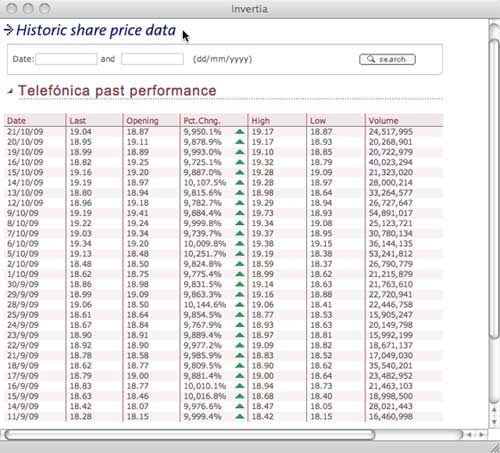 An alternative to this is to provide for an excel spreadsheet data download. I encountered this in a couple of U.K. sites I investigated, but unfortunately, when I downloaded the data, it was in comma delimited format and not very user friendly. (I sometimes wonder if the investor relations departments ever actually take their sites out for a test drive, or merely take their data providers at their word.)

To go along with this, it’s helpful to provide investors with a way to calculate the worth of their holdings. Below is the page from British American Tobacco’s site that provides this calculator. Note that the calculator allows the investor to enter the data for share price in a number of different ways and also provides for calculation of the investment return.

All of this inures principally to the benefit of retail investors, as institutional investors will have very sophisticated systems for tracking price movement and charting, but it will also save a fair amount of heartburn in investor relations departments, as it should cut down on the number of calls coming in looking for this type of information, particularly around tax time.

Back in September, I published a post here on the Corporate Eye blog that discussed Interbrand’s annual list of the top global brands.  The 2009 list didn’t have a lot of big surprises, and passed by the eyes of the world without much fanfare.

Now, Sysomos has conducted additional research on the top 20 global brands listed in Interbrand’s 2009 ranking.  Sysomos analyzed those brands during the same period of time that Interbrand researched them for its best global brands list, and created a separate ranking based on how often those brands were mentioned online, particularly through social media.

Comparing the rankings of the brands included in the Sysomos study to the rankings from the Interbrand study is very interesting.  The results are below: 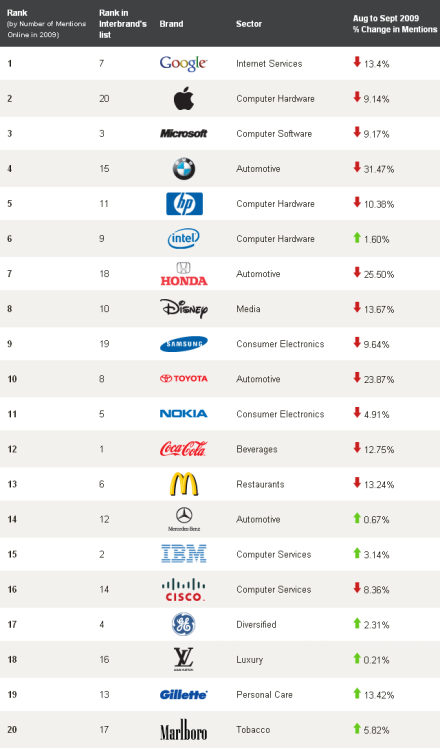 Perhaps the most interesting piece of data revealed by the Sysomos study is the difference in ranking between the Sysomos list and the Interbrand list for Apple.  This is a brand that has grown exponentially in recent years thanks to innovative products and a massive consumer buzz, particularly online.  Notice in the chart above that Apple ranks 20th on Interbrand’s 2009 list of the top global brands but in terms of social media buzz as calculated by Sysomos, Apple is #2.

One conclusion that could be speculated based on the data from this small study is that well-established, mature brands don’t seem to need the high levels of social media buzz to sustain their value, while new and growing brands can reap great benefits from the power of a social media buzz.

Of course, this is a very small study of just the top 20 brands based on global value, so conclusions can only be hypothetical.  However, it makes sense that new and growing brands have more to gain from investing in social media advertising and branding campaigns than established or new brands do.

What do you think of these two studies when the data is placed side-by-side?  Any interesting revelations?