In the world of Investor Relations, no one wants to think of anything as a “trick.” Yet, as Halloween approaches, I can’t help but use the holiday theme. So today, we talk about IR Trick or Treat!

The Fun Size Snickers Bar Treat: The Investor Relations Society will be awarding their IR Best Practice awards next month at a November 25 ceremony. Several categories make certain that there will be a little something for everyone when the judge’s remarks come out. Check out the “shortlist” here: http://www.ir-soc.org.uk/index.asp?pageid=267

The Vandalized Neighborhood Trick: The recent financial meltdown has left no corner of the markets unscathed. Unfortunately, not all the bad actors will be punished, and several of those who have no blame will be scarred in some way by recent events. Let’s hope that all the financial maneuvering by various governments and central banks make things better soon.

The Snack Size M&Ms Treat: The IR Magazine 2008 Continental Europe Awards were given out in October. While the magazine does not release its findings and reasons to the general public in order to be able to sell them as a for-fee study, the results give IR departments world wide a place to look to see what good cutting edge IR looks like.

The Toilet Paper Covered Trees Trick: When things go bad, it is human nature to try and find the bad guy that caused them. When things go bad and the media is around, the first finger pointed is the last point reported. The media (and thus the politicians who crave their attention) have pointed their quick finger at “excessive executive compensation.” No one would disagree that corporate boards at some companies have become rubber stamps especially when it comes to CEO pay, but if we “fixed” executive compensation tomorrow, would that make everything better? Probably not. Let’s hope that the focus here doesn’t preclude thoughtful examination of other potential problem areas.

The Healthy Snack “Treat”: There is one in every neighborhood, that family that gives out carrot sticks or some other healthy snack to combat all that candy. No one likes to see the kind of mess the economy and markets are in right now, but the silver lining is a wake-up call to all investors, lawmakers, regulators, companies, and employees. Things can and do go wrong. Going out on a limb just because something “seems safe” is a recipe for disaster. Recent events should cause some of the hundreds of people I’ve seen laughing at good solid financial advice because they found the “secret” in some book or website to re-evaluate their financial situation and hopefully make moves to more solid grounding.

The Ratings Agency “Trick”: Those of us who work in the world of investing and finance have been wondering since day one what the media has just started noticing. How could all of these HIGHLY RATED investments just up and crash like this? What good is a rating or a ratings agency if they can’t see a train wreck this big coming? Hearings in the US Congress have been predictable, but people remember.

The truth is that at the end of the day, times are tough for the IR world, and they aren’t going to get easier any time soon. But, the good news is that there is a renewed focus on investor communication, especially from those companies who are eager to show that they are not in the same boat as others. Investor Relations has sometimes been slow to evolve usually due to regulation and uncertainty about liability. Now, with the focus on transparency and making sure investors are getting the straight story, maybe the IR industry will be able to leap ahead.

Did you ever take “The Pepsi Challenge”?  Have you seen the Mac Guy vs. PC Guy commercials?  Chances are at some point you’ve seen some form of comparative advertising that could more accurately be called a “Brand Smackdown”.  Not unlike two brands entering an ultimate fighting ring, comparative advertising has become an all-out battle among some of the world’s top brands.

In the news of late has been the Dunkin’ Donuts vs. Starbucks taste test ads where Dunkin’ Donuts tells consumers that more “hard-working” people prefer their coffee than the high-priced Starbucks, “elitist” coffee.  Rumor has it, Time Warner is preparing to launch a comparative advertising campaign against Verizon. END_OF_DOCUMENT_TOKEN_TO_BE_REPLACED

A review of the FTSE100 Energy Sector demonstrating the importance of interactive content in helping consumers understand the sustainability challenges facing every industry. 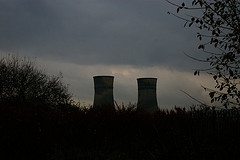 The vast majority of our power comes from huge, centralised plants which consume natural resources in order to produce electricity (and carbon emissions!).

As a consequence, the energy sector is permanently under the sustainability microscope. There are renewable energy options but they’re not going to be built overnight.

In the meantime, many companies hesitate about what to invest in which technologies; near future technologies appear to promise ever more efficient alternatives and many believe that he who waits will win.

There are three energy sector companies in the FTSE100: International Power, British Energy and Scottish and Southern Energy. It would be churlish to leave one out on a whim, so all three are part of this FTSE 100 Website Review.

END_OF_DOCUMENT_TOKEN_TO_BE_REPLACED

Not even your brain waves are safe from the all-powerful reach of Google.  According to Zdnet.com, Google and MediaVest have been studying brain waves to determine psychological responses to ads on video content.  It seems it’s not enough to know whether or not you click on an ad in an online video, now Google wants to know your internal, Freudian response to it, too.

Google tapped the skills of NeuroFocus to measure, “skin responses, eye movement and EEG brain scan” to determine internal, psychological responses to in-video overlay ads.  That all seems quite technical, yet the results of the study are not quite as technical. END_OF_DOCUMENT_TOKEN_TO_BE_REPLACED

The AccountAbility AA1000 Assurance Standard 2008 Edition (AA1000AS 2008) was launched in London last Friday at an event attended by several clients and practitioners.

The newly released standard replaces the original AA1000AS, launched in 2003. Since then the importance of corporate sustainability has grown with other organisations launching competing products for different markets. END_OF_DOCUMENT_TOKEN_TO_BE_REPLACED

In two weeks, Dell’s leap into the world of Investor Relations blogging will be one year old. Birthday’s are always a good time to look back and take stock of how one has fulfilled their potential and goals. So, today, we take a look back at one year of Dellshares.

On November 1, 2007, Lynn Tyson made the first post on the Dellshares site citing the founding philosophy of Dell that direct relationships with customers were advantageous. Also noted was that credible and relevant organizations were taking advantage of technology and the Web and there was no reason IR shouldn’t either.

The post laid out the goals and hopes for the new blog from the Dell Investor Relations team. The main goal was to not just push out information, but to also give perspective, context and meaning to that information. Another goal was to be able to have a dialog with investors by answering questions.

The biggest goal of Dellshares may have been the one that got glossed over at the end of the post. Michael Dell noted that “there are conversations going on about us all the time and we want to be part of those conversations.” The Internet, for all of its potential as a useful and widely available means of distribution information, is just as powerful at spreading rumor and innuendo. In the end, Dell was hoping that by giving information straight from the source might help color those conversations that are going on all the time with at least a dusting of the company’s version of the truth.

Also noted, were the “legal obligations” that would limit what could and couldn’t be said, and even when it could be said. However, the overall goal was to provide an additional source of investor information, and hopefully an improved source as well.

While Dell’s stock price is down from 29.70 on the day Dellshares was launched to an 11.99 closing price on October 23rd, hardly anyone will be blaming the Dell blog over issues like market conditions, and the sub-prime mortgage mess in the U.S. So, in what way should we evaluate the success of Dellshares? By using the goals that Investor Relations had for Dellshares when it was launched.

Dellshares archives show 29 posts in the past year. On one hand, that seems very low. On the other hand, a company can only comment so many times on its strategy and corporate moves. Considering, those 29 posts make an average of over 2 posts per month, one could say, that as a pure number that would be a passing grade.

However, what matters is what those posts were able to accomplish. Recent posts have taken on an “Oh, by the way” tone that doesn’t seem to convey that perspective and meaning that was hoped for. The 9/16 post is less than 200 words and says that pursuant to a March 31st announcement that Dell would be evaluating its ownership of Dell Financial Services, that they had decided to keep it. The perspective and meaning is exactly what is missing from the post. Compared to more meaty posts in December 2007, such a post is a bit of a disappointment.

Other posts though continue to show the promise for this form of communication. The posts made with the release of quarterly earnings data are particularly useful for those investors who don’t want to parse the standard press release, nor listen to a full conference call. These posts give Dell a way to highlight the same information they highlight for analysts on conference calls for retail investors.

Some of the best posts are those that make a comment on strategy as previously announced. These posts give a concrete example of where the company thinks it is executing on a defined objective. For example, the August 12, 2008 post describes the roll-out of a new line of notebook computers. It reminds investors that one of the company’s five strategic priorities is notebook computers, and explains how the new line advances that goal. The great thing about a post like this, is that an investor can read the post and decide if they believe the company’s move is the right one whether in terms of size, aggressiveness, or overall utility. If the investor likes the move, it can be a reason to invest. Conversely, an investor who feels that such a move is too small, too aggressive, or even ill-thought out, can avoid investment, or look to sell their shares.

One thing that does seem to have fallen by the wayside, is the objective of answering questions from investors. Since the first two months of the launch of Dellshares, there haven’t really been any posts directed at investor sentiment or questions. One wonders if other posts are tailored in response to such questions without directly mentioning that fact. Either way, it does seem that investor participation has gone away, with many posts in the last 6 months have just one or two comments, and many having zero.

For whatever success the Dell IR blog had, it did do one very important thing. It started the dialog on the feasibility and the wisdom of using such technology in the IR space. A major well known corporation like Dell launching such a venture gives it instant credibility and the IR space in general can be thankful for that. Let’s hope in the year ahead that Dell returns to Dellshare’s roots and once again attempts to add the elusive context and meaning to information, as well as re-engaging the shareholders in the postings.