Increasingly, companies are hiring community managers – but what are they, and what do they do? And, most importantly, do you need one?

In Indiana Jones and The Last Crusade, the fearless archaeologist has to step through a grid of letters in order to reach his goal. If he puts a foot on the wrong letter he’s promised nothing more than a long fall to a hard landing.

Converting business’ existing tools and structures to a more sustainable model is equally fraught with danger. One false move and it’s possible that the existing financial basis to business could be lost with no real gain elsewhere.

This is why the establishment and development of sustainability indices by two of the most well respected brands, Dow Jones and FTSE, was a welcome development.

Both have now been operating for over seven years and look set to strengthen their role as stock indices of the future. But how so they gauge the sustainability of their constituent companies?
END_OF_DOCUMENT_TOKEN_TO_BE_REPLACED

I planned to write a post about “Leadership Branding”. In case you want a short definition here it is, “In other words, a leadership brand occurs when leaders’ knowledge, skills and values focus employee behavior on the factors that target the issues that customers care about,” this is from the book, “Leadership Brand” (Harvard Business School Press, 2007).

As I researched this further, I came upon two annual surveys of “The Best Companies For Leaders” The most prominent is featured in Fortune Magazine, and is conducted by Hewitt Associates and the RBL Group. 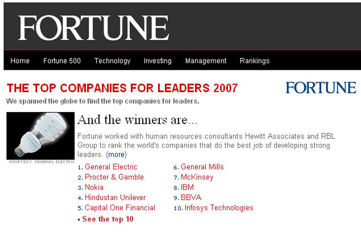 END_OF_DOCUMENT_TOKEN_TO_BE_REPLACED

Think of 1984 and somewhere in between the famine in Ethiopia and Michael Jackson’s hair catching fire, you’re likely to think of George Orwell’s famous dystopian novel.

Part of this is Newspeak, which is characterised by the absence of synonyms or antonyms, meaning that there is only one “authorised” word for any given thing or activity.

1984 is also the year in which R. Edward Freeman published his book “Strategic Management”. It was here that the concept of a stakeholder was coined to describing anyone who affects or is affected by a corporate body.

I would not for a moment class the term “stakeholder” as being part of any form of Newspeak, especially as it’s one of the more useful terms to have come out of the linguistic wave which swept through business in the 1980s.

However for a concept whose management principles will be 25 years old next year, it’s interesting to note that companies are still unsure how to use their websites to communicate sustainability to their stakeholders.
END_OF_DOCUMENT_TOKEN_TO_BE_REPLACED 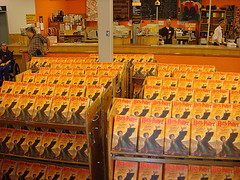 Business practices, the workplace, skill requirements have changed so much that the business world seems that it has turned upside down – Leadership styles are morphing – command and control is out, organizations are getting flatter, the competitive landscape is chaotic, people are looking for meaningful work, customers are in control.
END_OF_DOCUMENT_TOKEN_TO_BE_REPLACED