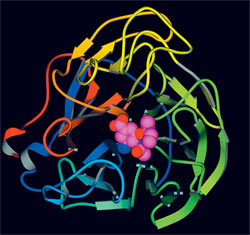 Now that the initial flurry of panic about swine flu has stabilised, and everyone’s had a chance to plan their response, how well do you think that companies are handling this on their corporate website? We’re a long way from a crisis, but my ‘handy’ booklet from the government about swine flu arrived this morning, so clearly someone in authority thinks a crisis is coming…

There have been calls for companies to communicate with their employees about how to deal with swine flu should it affect them, and for companies to have contingency plans in place for a wider outbreak of flu. It is probably not appropriate to document these plans on the corporate website, although it wouldn’t hurt for a reassuring voice to be heard… especially since absentee rates have gone up.

Those companies directly affected (in a good way) by the approaching pandemic have done a good job of communicating with at least some of their website visitors. 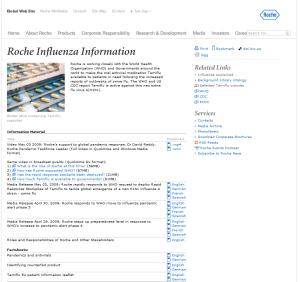 Roche, perhaps the company most associated with combating flu pandemics, have a dedicated flu centre, where they’ve pulled together images, video, factsheets and press-releases about the flu, their products, and the actions they’ve been asked to take.

This is clearly linked from the home page, where they have a large banner header about influenza – and the term ‘influenza’ also appears in the tag cloud below.

In addition, one of their recent Investor Updates refers to their donation to WHO back in 2006 of 5 million treatment courses of Tamiflu, and confirms that they’ve been in discussion with WHO about the recent outbreak. 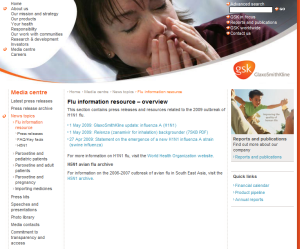 GSK have also collated some information about flu, which they’ve made available via a couple of links from their home page – one to a GSK Update and one to a collection of press releases. They also have a link to a pre-pandemic flu press kit from their press kits page in their media centre, which didn’t seem to be available on the day of our visit.

These companies – despite presumably potentially having improved sales this year as a result of flu – don’t seem to be addressing investors directly on this topic. Roche’s page providing key figures for 2008 does mention Tamiflu sales, but only to exclude them from the count – and it isn’t easy to learn anything more detailed. For example, how much of their business is based on Tamiflu sales? Prospective investors may want to know how the company expects to be affected by the impending pandemic. Not specifics – obviously Roche can’t and wouldn’t want to predict the need for Tamiflu – but if they provided figures for last year, we could do our own predictions, perhaps using a scenario analysis system like Adidas’.

On the other hand, perhaps stock prices will be minimally affected by a pandemic, and so this wouldn’t be interesting to investors.

But wouldn’t the company view on this be interesting to a corporate visitor in itself? What do you think? (I think that there will be some economic impact, though perhaps less than you’d think given the media discussion over the last couple of weeks).