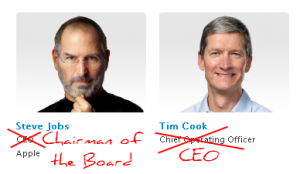 Steve Jobs resigned as Apple CEO today via a letter which was published on Apple’s website. Later, Apple published a press release stating that Steve Jobs would stay on as Apple Chairman of the Board and Apple COO Tim Cook (who has been marked as Jobs’ successor for some time now) will take the role of Apple CEO.

This announcement is not a surprise to anyone who has been following the Steve Jobs and Apple story over the past few years. In October 2008, I published a post here on the Corporate Eye blog called The Brand Champion Exit Strategy – Lessons from Steve Jobs and Apple where I talked about how a false report that Steve Jobs had a heart attack sent Apple’s stuck plunging. I ended that post by saying, “You never want one person to hold so much power that your brand’s short or long-term success becomes dependant on him or her.  Ensure your brand can stand on its own with brand champions helping to push the brand in the right direction for strategic growth.”

Then in January 2009, I wrote a post called The Brand Champion Exit Strategy Redux – Lessons from Steve Jobs and Apple where I talked about a second reactionary plunge in Apple’s stock after rumors broke that Steve Jobs would not attend the popular Consumer Electronics Show in Las Vegas due to health reasons. I ended that post by saying, “The lesson to learn is this – develop brand champions but don’t put all your eggs in one basket.  And most importantly, put together a succession plan before your primary brand champion exits.”

Again, Steve Jobs’ resignation is not shocking. The financial world has been waiting for it for years, and while Apple’s stock is feeling the effects, financial analysts aren’t overly concerned. One of the main reasons they’re not worried is the fact that Tim Cook has been being groomed as Steve Jobs’ successor for some time now. As Ian Sherr of Dow Jones Newswire wrote today, “[Analysts and investors] say Apple will continue delivering hit products because of the culture Jobs has created at the company. ‘Tim is molded after Steve,” said Colin Gillis, an analyst at brokerage BGC Partners, who recommends buying Apple stock on the dips. “If they got an outside CEO, there might be concern.'”

Of course, Steve Jobs isn’t leaving Apple completely nor is he leaving his role as brand champion. In fact, his move from the role of CEO could have a positive effect on Apple after the resignation buzz dies down. It’s no secret that Jobs runs Apple with an iron fist (check out this article on Wired.com and this article from the Guardian Technology blog to get some juicy details about Jobs and the Apple culture).

What do you think? What’s next for Apple after Steve Jobs leaves the role of CEO? Leave a comment and share your thoughts on the changing of the guards at Apple.