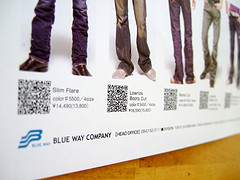 Quick response codes (QR codes) are becoming the norm in print advertising, and according to a report by mobile marketing firm Nellymoser, approximately 4,500 QR codes appeared in the top 100 magazines during 2011.

Those QR codes appeared in a mix of ads and editorial pages, but advertisers are definitely the ones leading the print magazine QR code trend.

Nellymoser found that women’s magazines are the most popular place for QR codes with the top magazine titles for QR code use ranking as follows:

Between January and December of 2011, QR code usage in magazine advertising jumped by over 122% from 3.6% of ad pages to 8% of ad pages. Most of those QR code ads are from the beauty, home, and fashion categories according to Nellymoser. The top brands using QR codes in magazines during 2011 were:

Nellymoser also reports that the more QR codes that are in a magazine, the higher the overall scan rates, and QR codes that include a message describing the benefit consumers get when they scan them receive higher scan rates than stand-alone QR codes. These are useful findings for brands looking to engage with consumers via print ads. Including an ad with a QR code in a publication that already has many advertisers who use QR codes is a better choice than being the lone QR code advertiser in a magazine.

This is a situation where consumer behavior simply makes sense — common sense. Once a person takes her mobile device out to scan one QR code, it’s a lot easier to keep on scanning. That’s one less hurdle for the advertiser to have to navigate in its effort to connect with consumers. Add a compelling message alongside the QR code, and that advertiser stands a much better chance of driving scans and conversions.

What do you think about QR codes in magazines? Are you using them to promote your brand yet? Have you ever scanned one? Leave a comment and share your experience from the brand and consumer side.