You might not expect a brand like Heinz to launch an innovative social media marketing promotion, but that’s exactly what happened in the U.K. when Heinz started selling limited edition ketchup from its Facebook page. Check out the image from the Heinz Facebook page below. 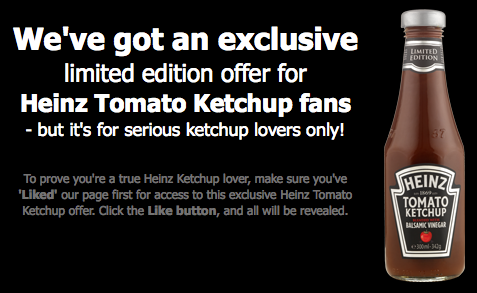 In an effort to boost the Heinz Tomato Ketchup UK Facebook page audience, the company released a limited edition Balsamic Vinegar ketchup product. Only 1,057,000 bottles of the limited edition product were produced, and according to Ad Age, 57 of those bottles were sent in advance of the promotion to key bloggers and VIPs. This was a smart move since connecting with online influencers in an effort to convince them to talk about your brand is a critical first step to social media marketing success. The next 3,000 bottles were offered for sale through the Heinz Tomato Ketchup UK Facebook page to the first 3,000 new people who “liked” the page. Facebook users could buy the bottles directly through the Facebook page using a built in payment system and a credit card.

Of course, the promotion didn’t go off without some glitches — primarily because the response was a lot bigger than Heinz anticipated. The Facebook page and ordering process were slow and didn’t always work as well as they should have, but overall, the promotion appears to have been a success for Heinz.

People are publishing on the Heinz Facebook page about how much they love the new ketchup flavor. They’re taking pictures of their bottles (including the packaging and accompanying note) as well as of themselves holding their new Heinz ketchup bottles and publishing those on the Heinz Facebook page, too. That means their comments and photos are being seen by a lot of people, which gives Heinz a significant amount of positive online buzz.

In simplest terms, this is a promotion that got people talking and undoubtedly provided Heinz with excellent information to use when developing future social media marketing initiatives.  For consumers, this promotion was interesting, easy to participate in (despite the order processing glitches), and fun. It’s not surprising that it was successful.

What do you think? Were you one of the 3,000 people who got a bottle of the limited edition Heinz Balsamic Vinegar Ketchup? Leave a comment and share your thoughts about this creative Facebook promotion.