A guest post today from Jerry Burrows: if you have a CEO who is keen to embrace social media, how would you advise them?

How Should CEOs Engage With Social Media? 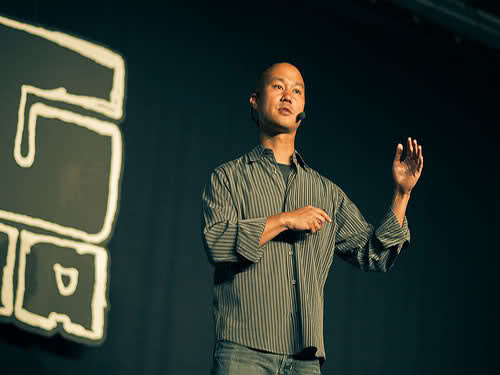 Forbes’ article, ‘Yes, CEOs should Facebook and Twitter’, provides a sound argument for why CEOs should abandon their traditional prejudices toward social media and hop on the bandwagon.

The idea certainly has the support of “Web 2.0 evangelists [who] argue that social software can be used to boost productivity. They say it can facilitate an open-ended corporate culture that values transparency, collaboration and innovation. Most important, it can be an effective way to build a customer-centric organization that not only communicates authentically but also listens to customers and learns from that interaction.”

Blogs and social media can facilitate that genuine conversation between CEOs and customers–and encourage those customers to become brand evangelists.

If you need one example of how company CEOs can use social media to their advantage, look no further than Tony Hsieh, founder and CEO of online shoe and clothing retailer Zappos. Hsieh’s Twitter following is massive. He has just under 2 million followers–clearly, the man tweets hard. And Zappos is a more than successful enterprise for the 37-year-old entrepreneur: it sells about a billion dollars worth of shoes and accessories a year. (And Tony’s not the only one who tweets; at least 440 other employees do, too.) There’s even a dedicated microsite. So how can you replicate his success? How is it done?

Yes, the goal is transparency, affability, and authenticity. But there are limits to that kind of sharing, too. Be casual, but if your personal life is especially tumultuous, you may want to leave the details out. The golden rule? Don’t speak ill of anyone. No, not your competitors, either. Recall the social PR disaster that occurred in 2007 when Whole Foods CEO John Mackey made comments on various finance forums under a pseudonym attacking rival company Wild Oats Markets, and predicting that it would fall into bankruptcy. The result was a permanent tarnish on the Whole Foods brand image.

“It wouldn’t be in our culture to be salesy/pushy so we’re not using Twitter to promote Zappos just for the sake of promoting Zappos. We’re using it for what I think it was intended, which is a social network that we all enjoy.”

If you want to follow in the successful footsteps of Zappos, make your interactions on Twitter and Facebook as genuine as possible by avoiding spammy language. Use your microblogging platform to post useful links about topics that relate to your industry, reply to questions from inquisitive customers (or direct them to the appropriate source), handle customer service requests, etc. Transparency is key; other potential customers that come across your social media profile will be able to view and appraise your customer service dealings without the traditional barrier of secrecy.

As the CEO, you’re the face of your company. Remember that you’re also setting an example for the rest of your employees. That means that you should use your social networks to remedy problems and address widely-held customer concerns. No, it’s not the same as indiscriminately airing out your dirty laundry; but it helps to keep your brand’s image fresh and timely. Moreover, don’t be afraid to link to blogs and press releases that quote you as an authority. Encourage others to take actions on a social issue that is important to you.

The Zappos brand likes to give their fans recognition for their loyalty. Hold contests and competitions for your followers (maybe something to the tune of how many followers can you get to follow you), call out loyal retweeters, etc. It’ll make them more appreciative, and know that they’re the center of your brand. Ask them for their input and they’ll feel appreciated–turning them into even more passionate advocates in the end.

About the Author: Jerry Burrows is a freelance writer for Tektronix. Tektronix is a leading supplier of test and measurement equipment like a digital multimeter or a pulse generator.