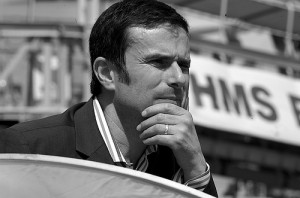 Connections. The world revolves around connections.

Businessmen love connections because it brings them business by word of mouth. Not only is this a pleasant ego boost, but also because it saves on that month’s advertising budget.

Consumers love connections because you will always trust an acquaintance’s opinions more than a total stranger’s. For instance, we just changed our gas & electricity supplier to one professionally sold to us by the grandmother of our daughter’s classmate.

And journalists, like me, hoard connections. Maybe one day you’ll need that person’s insight, or maybe one day they’ll feed you a good story. I’ve probably just written yours down while you were reading this.

Really great journalists end up working for major news outlets where their highly informed commentary will influence millions of people. At this pinnacle your storytelling ability will be excellent and further promotion can rest more upon the contacts you have to give that story the extra colour.

One such major news outlet is the BBC.

Moving to a Sustainable Banking Model

There was a very interesting discussion on Monday morning (9 Feb 2009) on BBC Radio 4’s Today programme at 8.10am. (the full 12 minute discussion is available as “Bankers ‘to apologise’ for mistakes”)

Instead we had a cosy little chat between John Humphrys, anchorman extraordinaire, Robert Peston, the BBC’s Business Editor, and Nick Robinson, the BBC’s Political Editor.

The topic under discussion was the appearance of four former bank executives later in the day before the Parliamentary Treasury Select Committee in what has come to be called “Banker Barbequing”.

First there was a discussion about

as John Humphrys put it. The general consensus was that it shouldn’t be politicians, so the discussion moved away from who should run banks and towards how they should be run. John Humphrys asked:

Do present bankers … understand … [that there is] this appetite, this insistence that things change fundamentally?

They are edging towards such an understanding …. I was shocked at the World Economic Forum just ten days ago then about just how much denial there was about the place among bankers about just how much of mess they were in. They were still somehow clutching at this straw that when we got through this crisis it would be back to business as usual, back to the big bonuses, back to the financial engineering.

At which point Nick Robinson chimed in with:

I think what we’re seeing also is that politics is trying to break free [from] .. Britain’s huge banking empire.

He went on to give examples of how politically influential bankers had become, chairing commissions and running parts of Government. As they lose this position of power the shape of banking was bound to change.

Robert Peston expanded upon this:

You are beginning to see politicians, David Cameron at that World Economic Forum in Davos, the Prime Minister yesterday, grope towards a world which is not so dependent upon the financial sector; Cameron talking about “moral capitalism”, Gordon Brown talking in advance of this big G20 meeting in London in April about a new Global World Financial Order

This story is moving apace as I write. The idea that banking bonuses should be paid in share options has been floated, forcing top bankers to think in terms of years rather than months when making strategic decisions. 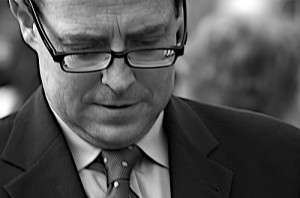 All of this will have a deep and far reaching impact upon the business sector in the UK and beyond.

When the economy begins to recover companies will look to re-leverage their positions using bank loans.

However instead of producing a business plan which talks in terms of simple financial returns, companies may also have to satisfy criteria about community and environmental impacts as well.

Which leads me to an interesting thought: would banks become the de facto sustainability regulator for UK businesses? Something tells me the politicians would like it that way as it would take the messy business off their hands!

What do you think? Are we moving into a post-capitalist world where banks are concerned with more than just their financial returns, or should politicians leave the banking sector well alone?

And if the banks are eventually “CSR’d”, how will this affect the business of business?

Picture Credits: And the question is (Robert Peston) and The eyes have it (Nick Robinson) by Steve Punter from Flickr under Creative Commons Attribution Licence.
I tried to find a usable photo of John Humphrys but very strangely, given his notoriety, there are none! He’s the chap in the orange box in the top right-hand corner of the Today website front page.

A former CTO, Chris has a broad and varied background. He’s been involved with blue chips, consultancies & SMEs across a wide variety of sectors and has worked in Europe, the Middle East and Australia.

In 2007 he decided to combine his knowledge of business and IT with his passion for all things sustainable and has been busy writing ever since. However, his greatest ambition remains to brew the perfect cup of coffee.

Previous Post On harsh truths and the corporate website
Next Post You Have Not Because You Ask Not: The Media Appeal From Wikipedia for Financial Help