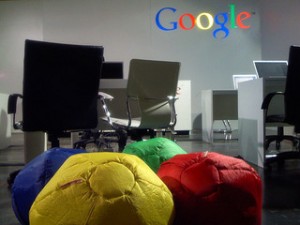 Last month, I shared the results of the 2014 BrandZ Top 100 Most Valuable Brands ranking and the big news everyone was talking about was the fact that Google ousted Apple from the top spot. Apple stole the number one ranking from Google in 2011, but in 2014, Google took it back. Today, Google’s brand value is estimated at $158 billion, which is an increase of 40% over its 2013 value. On the other hand, Apple’s brand value in 2014 is $148 billion, which is a decrease of 20% from 2014.

Those are two questions that Finances Online and Ruby Media Corporation try to answer in their new infographic (shown below). They offer five reasons why Google is on the rise and Apple is on the decline. Here is an overview of their analysis with my thoughts added in:

According to the analysis in the infographic, consumers are excited about Google which launches products more frequently by enticing consumers and building excitement with series of beta launches before a completed product is fully launched.

This is actually a form of perpetual marketing that can be very effective. Each time Google makes a small tweak to a product and announces a new version, there is inevitable buzz about it online. In contrast, Apple holds its product development close to the vest and launches with a bang. Both strategies can work, but it appears that Google’s is working better in 2014.

Google pursues a broad differentiation strategy with products that surround consumers with Google branded experiences. As the infographic points out, Google has mobile products, wearable products, cloud-based products, productivity tools, and even driverless cars! On the other hand, Apple is far more focused in its brand strategy. Again, both strategies can work, but Google is dominating today.

As the infographic explains, Google’s corporate culture focuses on a team of creative and innovative people working together to organize the world’s data and launch products that make life easier. Apple is in a state of flux. It’s brand and strategy were so closely tied to Steve Jobs in consumers’ minds that there is a great deal of brand confusion now.

As the infographic says, “Google is the master of crowdsourcing, involving users to perfect the product. Apple works on secret labs and wants to surprise the crowd.” As discussed in #1 above, Google’s strategy has gained favor with consumers over the past year, and Apple is feeling the effects.

As I always say, once you set consumer expectations for your brand, you must meet them in every customer interaction. If you don’t, consumers will become frustrated, disappointed, and confused, and they’ll turn away from your brand in search of one that does meet their expectations in every interaction. As the infographic rightly says, “With each product launch, consumers expect Apple to redefine a category in the magnitude of iPod/iTunes, iPhone and iPad. Anything less is mediocre.”

What do you think are the primary reasons Google ousted Apple as the most valuable brand in 2014? Share your thoughts in the comments below.