You’ll have seen the adverts for the UPS widget, which is designed to help you make better use of their services, and you probably also know about the EasyJet widget for booking flights. Both these tools are designed to help the user interact with the company – as well as make more sales.

I reviewed a bio-technology site recently which was written in language I didn’t understand.

I did study sciences until I was 18, and have a doctorate (though in ancient philosophy and science, not 21st century science), so I’m not uneducated, but I still didn’t understand it. And I wouldn’t be the only one. According to the Campbell-Ewald Health research of 2006, only 55% of Americans can understand the content on pharmaceutical sites, because the average site requires 12 years of education. Many people browsing such sites will have less exposure to language than this.

The problem for me was simply the terminology used.

Some of the scientific language used could have been rephrased into simpler English, but some of it was essential. To play with language for a moment, it was essential both because it was necessary, and because the science it was describing is the essence of the company.

This problem isn’t true just of scientific sites, of course. Every industry has its own language and terminology. While it is vital to convey the nature of your company, it is also important that your visitors can understand what you’re saying.
END_OF_DOCUMENT_TOKEN_TO_BE_REPLACED

Not to sell the products or services that you deliver – though that would be great, obviously – but to sell your company to future employees.

Assuming that you’ve got the right people in the right jobs for them, and that you’re keeping them happy with interesting work and great prospects – who could possibly be better placed to sell your jobs to this year’s crop of graduates than last year’s?

The more information that job seekers can get about what it is really like to work in your company, what you do and what your company culture is like, the more informed their decision – whether to accept the job offer or to apply in the first place. And the more informed your applicants are, the easier (and cheaper) it is for Human Resources. You don’t really want them to have to spend time filtering out people who haven’t really understood your company, do you? Or to spend hours answering emails and phone calls with questions that could have been answered by the website?

END_OF_DOCUMENT_TOKEN_TO_BE_REPLACED

It would be difficult not to know that there has been a run on a British bank for the first time since the 1860s. Not the kind of historic record one wants to break really … I’m not going to comment on the financials, but I think this is a classic example of using your website to help manage people’s understanding of a major crisis. 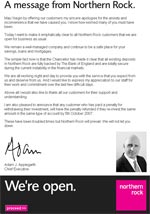 I didn’t visit the site for a while (at least partly because there were reported difficulties with the site crashing as a result of the public interest in this episode), but have noticed over the last few days that there are new pages on display. The new first page (a splash page before you can reach the home page) is a message from the CEO, similar if not identical to the full page ad with the same message run in the papers recently.

END_OF_DOCUMENT_TOKEN_TO_BE_REPLACED

I’ve already discussed the basics of a corporate media section, and then how to step it up a gear. So – how do you get to the wow factor?

Bear in mind that this section will attract not only the professional media worker, but also your potential customers and investors, so it is worth some investment. I have noticed that some companies like to verify that a visitor is a genuine media worker before allowing them access to some of the pages – and haven’t really understood the benefits of this. Please don’t require people to sign up to gain access to your media features …
END_OF_DOCUMENT_TOKEN_TO_BE_REPLACED

I recently discussed what should be included in a competent media section. Today I want to look at what you need to step the Media section up a gear.

The better Media sections contain a range of additional elements to make it easier for the visitor. This includes additional information that might be useful, easy to access and packaged in helpful bundles, and some tools to help them get their job done. These elements include:
END_OF_DOCUMENT_TOKEN_TO_BE_REPLACED